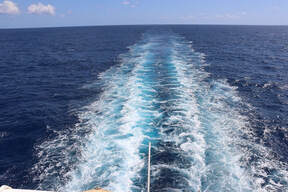 ​Tahitian Dreaming Tropical Paradise with Paul Gauguin Cruises
‘la ora na e mamava. Welcome!
What do the ‘Islands of Tahiti’ inspire in you?
Well, our dream came true! Following an invitation from Paul Gauguin Cruises to select from one of their multi-award winning cruises, we selected the 14-day cruise from Papeete to the Marqueasas visiting Fakarava – Fatu Hiva – Hiva OA – Tahuta and Nukuhiva. Then the Society Islands of Huahine – Bora Bora – Tahaá – Moorea and returning to Papeete.
Join us on an adventure of a lifetime, sailing the islands of Tahiti ... 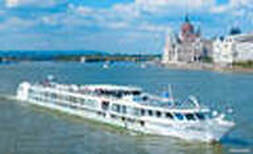 ​Symphonie and the Capitals of the Danube   The Beautiful Blue Danube
With the crack of a whip, the dynamic riding skills of Hungarian horsemen thrilled the crowd in the old wooden stand, providing one of the highlights on a 1000-kilometre cruise along Europe’s second longest river – the Danube. Features editor, John Newton, joined CroisiEurope’s rivership - Symphonie – for the eight-day cruise spanning three countries.Join John on another CroisiEurope cruise ...

​For US – Mature Travellers
We won’t admit this (in public) but as we mature we tend to drop a few things and a very expensive drop would be our mobile phone. It might survive a dry fall, but if into water! ….
Seaquatix is a waterproof case for phones and valuables that allows you to take photos and videos underwater straight from your phone.
Get the pic and save your phone ... 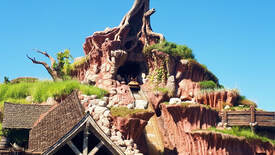 ​Cruise Ship's Historic Return to SA's Copper Coast
When CMV's Vasco da Gama made its maiden call to sleepy Wallaroo, the town and its history came alive. Roderick Eime (www.travography.com ) is there for the big day.
​Join Roderick as they wake up Wallaroo ... 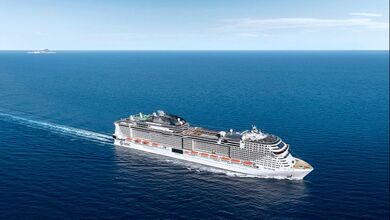 MSC: Is this the future of cruising?
I'm here in Hamburg for the very festive launch of MSC Grandiosa, the brand new180,000 GT, 331m flagship of the world's largest privately-owned cruise line and screen idol, Sophie Loren, is on hand as usual for the ribbon cutting in front of the world's travel media and more than 14,000 travel agents.
Sail with Roderick Eime for the first cruise ...

Special Offer: Paul Gauguin Cruises, Special Cruise Only Fares when booked before 29 November 2019
Paul Gauguin Cruises, operator of the highest-rated and longest continually sailing luxury cruise ship in the South Pacific, are excited to offer special cruise only fares for bookings made before 29 November 2019 on select cruises. Don't miss these offers ....

Mature Traveller and Australian Cruise Magazine are about to enjoy a cruise of a lifetime …..
The Marquesas, Tuamotus & Society Islands for a 14–night Cruise on Paul Gauguin.
You can look forward to our complete reviews of the ship, the cruise, the islands and all the other exciting things we will find for you.
Please look here for the latest specials on offer:
See their latest brochure release: http://www.maturetraveller.com.au/paul-gauguin-cruises-2020-brochure.html

​RUBY PRINCESS ALREADY A BIG HIT IN AUSTRALIA
From Editor At Sea, Dallas Sherringham, onboard  Ruby Princess
Ruby Princess's first deployment to Australian waters is proving to be a major success with tens of thousands of passengers already booked. Princess fans are a devoted group: I know because I am one of them. And I am spending a month onboard cruising from LA to Sydney via Hawaii, Tahiti, Samoa and New Zealand.                                              Read all about it ...

​Port of Seattle
The Port of Seattle, is celebrating 20 years of serving the cruise industry.
This year, the Port of Seattle will host the three largest cruise vessels on the West Coast, leading with the arrival of the Royal Caribbean Ovation of the Seas—with 4,180 passengers. The Norwegian Joy makes Seattle its homeport this year and its sister ship, Norwegian Bliss returns, both double berth passenger capacity.
Read more on this famous Port ... 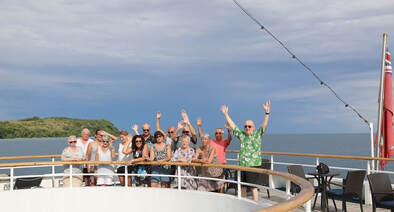 ​CAPTAIN COOK CRUISES FIJI HAVE THE FRIENDLIEST SHIP IN THE WORLD
Dallas Sherringham and Michael Osborne find that going on a luxury voyage aboard Captain Cook Cruises Fiji is like going off to explore Paradise with a group of close friends aboard your own super yacht.
The cruise staff and crew aboard their superb ship Reef Endeavour are quite simply the friendliest people I have ever had the fortune to travel with in my time as a travel writer. I recently went on a seven night voyage to eastern and northern Fiji to explore the cultural and colonial history of the islands.  Go straight to the feature ... 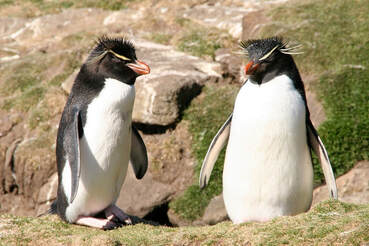 The Falkland Islands: A must-see destination on your Antarctic journey
Join John Maddocks as he wonders at nature and isolated islands.
The black-browed albatross sweeps low over our heads, landing rather elegantly beside its nest, a solid pillar of mud set in tall tussock grass. It joins hundreds of other nesting albatrosses on the steep slope that leads to a dramatic cliff edge on West Point Island, our first landing place in the Falklands.
Explore nature ...

​MSC Magnifica Visits Australia
Burgeoning MSC Cruises will follow up its first world cruise with a second round-the-world voyage next year, writes Features Editor, John Newton.
The Swiss-based cruise line - headquartered in Geneva - made its maiden voyage with MSC Magnifica to Auckland, Fremantle and Melbourne last month (March) during its first world cruise, which started and finished in Genoa after a 118-night sailing to 49 destinations.
Read John's report ...

​FROM ANTARCTICA TO THE KIMBERLEY COAST: SILVERSEA CONTINUES TO UNLOCK REMARKABLE EXPERIENCES IN ITS 10th YEAR OF EXPEDITION CRUISING
In its 10th year of expedition cruising, industry-leading Silversea Cruises is continuing to unlock a broad range of deep travel experiences for guests.  From the cool conditions of Antarctica to the warm climates of Australia and beyond, Silversea’s guests will explore over 900 destinations in 2019—more than any other cruise line.
See the entire season ...

​MULTI GENERATIONAL CRUISING GREAT FOR FAMILIES
Take the grandkids
As a travel writer and photographer I love cruising, but recently I had the chance to undertake a cruise that was completely different, a cruise our family had talked about for years.
Finally it happened. We booked a 10 day cruise on Carnival Spirit     Set sail for the Pacific ...

​The Royal River
A Visit to France and the Loire River with CroisiEurope.
It’s known as ‘The Royal River’ – and, as features editor, John Newton, found out on a leisurely and   romantic cruise along its legendary dazzling landscape, the Loire River in France lives up to its name. Join John on the cruise ...

The Rolling Stones’ first ever major exhibition, Exhibitionism: The Rolling Stones Exhibit, delivered by DHL, is coming to Australia this year exclusively to Sydney at the International Convention Centre (ICC) from Saturday 17 November 2018 through until 3 February 2019.
Exhibitionism is the largest touring experience of its kind ever to be staged, and the first time in history the band has unlocked their vast private archive.
Go in the draw to win one of six double Premium Flexi passes ...

​Discovering the Kimberley Coast
A trip once done in 2009, when we filmed it for our Foxtel show Travel TV. So when the invitation from Christian Fellowship Tours (CFT) arrived to cover their same trip, I answered in a heart-beat.
Get ready to sail ... 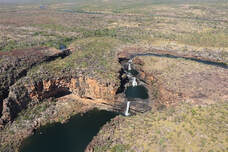 The Kimberley and Mitchell Falls
Michael Osborne takes a helicopter ride into the unspoilt wilderness of the Kimberley Coast.
Recently I had the chance to sail on a Coral Expeditions ship as a guest of Christian Fellowship Tours, sailing from Darwin to Broome along one of the most wondrous coastlines in the world.
It was a cruise I enjoyed eleven years ago and one that I have been waiting since then to go experience once again..                     Sail the coast with us ...

AUSSIE BUSINESS GURU WHO OWNS THE CONFLICT ISLANDS
Most business people one day dream of having enough money to buy a tropical island escape, but Australian business guru Ian Gowrie Smith went one better and bought 21 islands.
Cruise with Dallas ...

SAILING MEKONG’s PAST IN THE PRESENT
David Ellis cruises from Vietnam to Cambodia.
ABOUT to step aboard the little river boat Toum Tiou 1 in Vietnam’s Ho Chi Minh City for a trip up the mighty Mekong River to Siem Reap in Cambodia, we suddenly baulk at what we see lays before us.
Enjoy David's adventure ...​

​I do like to be aboard the Seaside
Cruise expert, Roderick Eime, travels to Miami to inspect one of the newest and largest cruise ships in the world. The MSC Seaside has certainly set tongues wagging.
But I was intrigued with this vessel, particularly as it was the first in a brand new class of advanced technology ship from this ebullient Italian family-owned shipping and cruise line.
The maiden voyage ... 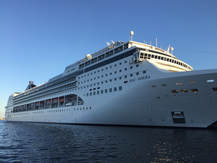 ​Life on Sea
Sandip Hor on his maiden voyage on MSC Opera
It’s almost midnight in Havana. I am standing at the top deck of MSC Opera with a ‘mojito’ in my hand to bid good bye to the Cuban capital. Soon the horn blows breaking the night-time silence and the vessel begins to roll on.
Sail on ...

​Ancient encounters along the Kimberley Coast
Aboard a converted pearl lugger in Australia's Kimberley, Roderick Eime explores some of the world's oldest landscapes in Australia's North West
Go to the adventure ... 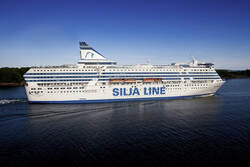 An Added Touch of Class
Sleek and sparkling white, the twin ferries of the Silja Line are more like cruise ships than passenger/car ferries plying the pristine waters between Helsinki and Stockholm and vice versa.
John Newton stepped aboard Silja Serenade and spent two nights sailing between the Finnish and Swedish capitals.
Read the feature ...

The Vasa Museum – A Must Visit When in Stockholm
By John Newton
Like the Titanic, the warship Vasa – the pride of the Swedish Navy's fleet – keeled over and sank on her maiden voyage.
Discover more ...

SWEPT AWAY BY BROOME
What better way to get there than onboard Sun Princess
A part of what attracted us to our grand adventure on Sun Princess was the ports of call.
The excitement was high as we sailed from Darwin and along the wonderful Kimberley.
Explore more ... 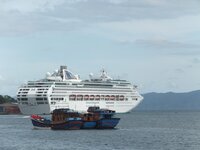 Ah! A life on the ocean waves – is the only life for me.
As a young lad growing up in the then fishing village of Watsons Bay in Sydney, where my grandfather and uncle were fishermen, I developed a love of the sea. But being a genuine red-head my complexion and the sun burn prevented me from spending too much time pursuing my dreams.
During my forties, I discovered cruise ships! Now THIS IS the life for me.   Cruise on ...

GALAPAGOS – THE GREATEST WILDLIFE REGION
The Galapagos Islands can lay claim to be the greatest natural wildlife region on earth and every adventurer should plan to visit the region at least once in their lifetime.
You go to the Galapagos not just to observe, but to immerse yourself in the wilderness.  Explore on ...

Why an Ocean Cruise?
Is it the ship or the ports of call? Maybe both!
For this time it was the ship …….
One of the most popular larger cruise lines for mature travellers is Holland America.
We sailed on the msVoledam, a long-time favourite with Australian passengers and we were not disappointed.
Read on ...

Riverboats and French Cuisine
There’s no doubt about it. The riverboats of a bygone era that slowly – very slowly – made their way down Europe’s iconic waterways have not only picked up speed but a wave of high-class new vessels have entered service – and, according to John Newton, upended the traditional notion that a river cruise is one big snooze.  Read on ...

Carnival Spirit
We review a South Pacific cruise and find a ship full of pleasant surprises.
Carnival Spirit off Isle of Pines and passengers enjoying the sparkling waters.
Read on ...

CroisiEurope opens up the Loire River to cruising
Two hours southwest of Paris, the Loire Valley presents France’s finest chateaux and vineyards in surroundings so picturesque they are World Heritage listed by UNESCO.
CroisiEurope, the Strasbourg-based French river cruise line who are represented in Australia by Cruise Abroad
Read on ...