Port of Seattle
Port of Seattle completes biggest cruise season yet, releases cruise economic impact data
Growth in Seattle cruise spurs need for third cruise terminal at Port of Seattle
The Port of Seattle, celebrating 20 years of serving the cruise industry, welcomes its biggest cruise season yet with an estimated 1,204,170 revenue cruise passengers this year, breaking last year’s record of 1,114,888. The results of a new economic impact report show that the cruise business is worth almost US$900 million a year, with each homeported ship call contributing US$4.2 million to the state’s economy, supporting over 5,000 jobs.
This year, the Port of Seattle will host the three largest cruise vessels on the West Coast, leading with the arrival of the Royal Caribbean Ovation of the Seas—with 4,180 passengers. The Norwegian Joy makes Seattle its homeport this year and its sister ship, Norwegian Bliss returns, both double berth passenger capacity.
Highlights from the economic impact report include the following
The total economic impact of cruise ships to the state economy in 2019, including direct, indirect and induced impacts, is estimated at 5,500 jobs, $260.1 million in labour income and $893.6 million in business output.
Based on these estimates, in 2019 each vessel call will support a total of $4.2 million in economic activity to the region. This represents an increase over previous Port of Seattle studies due to: 1) a revised and more thorough 2017 study of passenger spending locally; and 2) an increase in cruise operation expenditures in the region.
This growth in the Seattle cruise business has prompted the Port of Seattle to begin the process of building an additional cruise terminal. There are currently Request for Proposals (RFP) for the proposed cruise facility to three shortlisted teams. These teams will compete to become the winning firm that will co-invest with the Port to build and operate the facility, utilising the northern third of the terminal property for a single-berth cruise terminal. The Port expects to announce the winning team early next year, with delivery for the new facility for the 2023 cruise season.
Port of Seattle’s innovative Port Valet—a complimentary luggage service
If you’re flying domestically to a destination in the U.S. following your cruise, the Port of Seattle offers a luggage valet service called Port Valet. This will be the third year the popular program will be in place, which has significantly improved the operational efficiencies of processing cruise passengers at both the seaport and at the airport. The reductions in congestion and passenger wait times have also improved the Port of Seattle’s ability to process larger cruise ships.
Enjoy Seattle, Luggage-Free!  It’s Complimentary, Convenient and Secure.
This is a complimentary luggage service sponsored by the Port of Seattle. While on board your ship, sign-up, check your luggage and receive your airline boarding pass. Your luggage will be transferred directly to your airline and checked to your final USA destination.
How does the service work?
Port Valet is offered by Carnival, Celebrity Cruises, Holland America Line, Norwegian Cruise Line, Princess Cruises, and Royal Caribbean International. Once you’re on the ship complete the enrolment form found in your stateroom. Enrol early!
You can use Port Valet if you are flying with Alaska, American, Delta, Horizon, JetBlue, Southwest and United.
The night before your cruise ends, you’ll receive your airline boarding passes and special luggage tags from your ship’s crew.  Set you bags outside your cabin in the evening and the ship’s crew will pick them up.
What to do with four magical hours in Seattle…
You can pack a lot of adventure into four hours in Seattle.
Head to the Space Needle at the Seattle Center where you can soar up the elevator 605 feet to take in the 360-degree view of the skyline. It’s the perfect venue for selfies and photo ops. Take in Chihuly Garden and Glass with works by internationally renowned glass artist and Pacific Northwest native Dale Chihuly. MoPOP is a nearby mecca for music and pop culture fans. From there, ride the Monorail to Westlake Center for shopping galore and walk to Pike Place Market, one of the oldest continuously operating markets in America. Here you can watch fish fly!
If you’ve run out of time, transfer to the airport via Light-Rail from the downtown Kings Station. When you arrive at Sea-Tac Airport, proceed through security and board the plane. Your luggage is already checked in to your final destination. Track luggage via www.portvalet.maketraveleasier.com
For information on Seattle Cruising and pre/post cruise exploring in Seattle and Washington state, visit www.SeattleCruiseAlaska.co.uk
Editor’s note: Mature Traveller and Australian Cruise Magazine are looking at the possibility of visiting The Port of Seattle and taking a cruise to Alaska. Let’s hope it comes off as it will make for several great features. 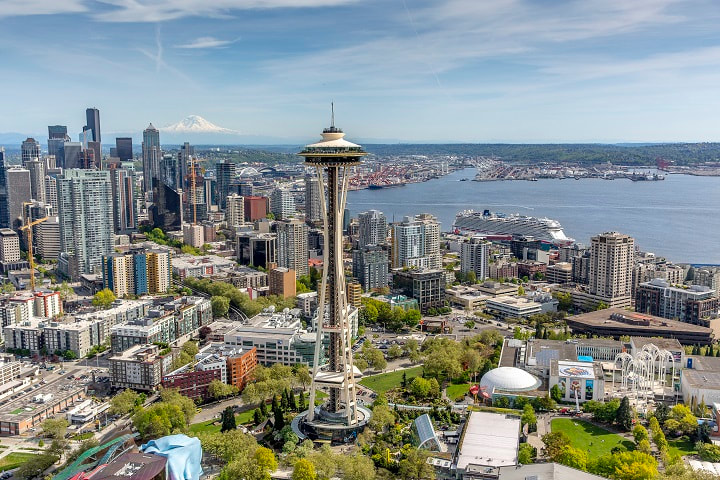